Getting used to computer generated voices.

Can you do it?

When I first started listening to these TTS (text to speech) audios it was very jarring on the ear. Even though there are some pretty decent approximations of natural voice intonations, it can still wind up seeming fairly monotonous. After a while I got used to it though and usually within a couple of seconds it assimilates into my consciousness as a natural and normal sounding voice.

I suppose I get into a certain frame of mind when listening. To me it is more like I'm "reading with my ears" rather than listening to someone tell a story. In a traditional audio book the narrator is likely to use different voices and inflections to get a certain character, scene or idea across. With TTS it is not quite so advanced yet.* There can be a certain monotony to it. BUT, if you listen like I do: I'm still using the parts of my brain of which when I read, I imagine the sound of a character's voice, invision the scenery and all the rest. 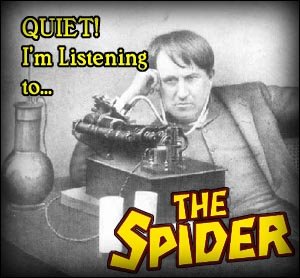 I think listening like that is a different frame of mind than listening to a human storyteller. It works for me. I'm wondering if it can work for others?

* It is getting there though. For example there are several TTS engines that can read a script, having different voices assigned to each character based on custom TAGS that let the engine know when to use that particular voice type.


OK! On with THE CHOLERA KING, Chapter THREE, Plague City!
CLICK TO LISTEN
(right click and "save link target as" to download)
The SPIDER (c) 2006 Argosy Communications, Inc