G-8 and his Battle Aces 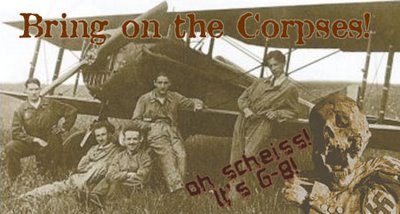 G-8 was an heroic aviator and spy during World War I in pulp fiction. He started in his own title G-8 and His Battle Aces, published by Popular Publications. All stories were written by Robert J Hogan, under his own name. The title lasted 110 issues, from October, 1933 to June, 1944. Several of the novels have been reprinted by several publishers. There have also been a couple of comic books published with him.

While not as dramatic a character as Doc Savage or the Shadow, his stories were often outlandish, with many supernatural or science fiction elements. G-8's true identity was never revealed. His man servant was named Battle. His wing-men were Nippy Weston and Bull Martin. His adventures entailed fighting against the lethal super technology that was constantly created by the Kaiser's mad scientists. 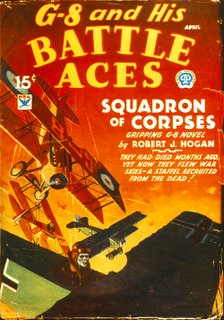 Our story for this session is SQUADRON OF CORPSES. "They had been buried months ago -- yet now they flew war skies, corpses that could not be killed! And for every resurrected Boche, a Yank died-- mysteriously, terribly. Who were these ghastly aces? How could G-8 and his buddies hope to fight a staffel recruited from the dead!"

We'll be doing two chapters at a time since the chapters are so short (about 10 -15 minutes a piece).