For those who came in late...
I read quite a bit. In fact I have at any given time at least 3 books on my nightstand that I alternate between. Usually a fiction book (right now the Carroll and Graf THE SPIDER book 4), maybe a comic (right now, CRIME CLASSICS) and a non-fiction book (right now Don Hutchinson's THE GREAT PULP HEROES). But that doesn't mean that I don't need some help in getting through the massive backlog of stuff to 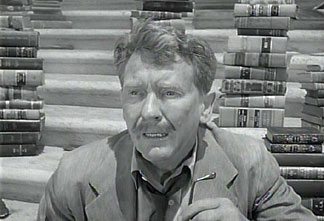 read. So many books, so little time.

We don't want to wind up like poor Henry Bemis and be all frustrated with all the reading you just can't catch up on.

So that's why this blog is here. To help you, who might be in a similar situation, get through your backlog with some alternate means. For me that's making these audiobooks and listening to them in the car. If you cruise back to the first several posts you'll see what my process has been for creating these audios.

I bet Henry Bemis could read The SPIDER if his glasses weren't broken. Well, if he had an MP3 player he wouldn't have a problem 'cause he could just listen to what our hardboiled vigilante is up to:

There was no other way. He moved his shoulders heavily, constantly aware of the thousands who, gazed upon him, who looked to him for leadership and for life. He flung an arm to the sky, turned, thrust his whole pointing body northward. "Forward!" he shouted, and all along the street, to east and to west and to southward as far as the eye could see and the ear could hear, the cry was picked up and repeated. "Forward! " A city was marching out to death, or perhaps to life.
And now for THE CHOLERA KING, Chapter EIGHT; The Exodus
CLICK TO LISTEN to Chapter EIGHT
(right click and "save target as" to download)
The SPIDER IS (C) 2006 Argosy Communications, Inc
Posted by shonokin at 12:10 PM