A pledge for The Trail of the Octopus 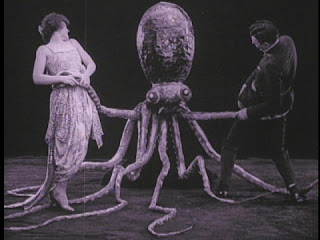 Although we may never see the complete serial of THE MYSTERIES OF MYRA there are other serials that may be just as amazing from the silent movie era.  Serials where it is obvious that a lot of money, time and creativity went into the productions.  One that will hopefully be available in Spring 2011 is THE TRAIL OF THE OCTOPUS.  This is another revelation from the age of the silents; where an amazing globe-trotting adventure comes to life as we meet great detectives, evil cults and mysterious strangers, spanning from a lost city in Egypt to the streets of San Francisco.

THE TRAIL OF THE OCTOPUS (not to be confused with the book by Goddard & Coleman) is a serial from 1919 consisting of 14 episodes totaling 7 hours. From the Serial Squadron's page the story goes: 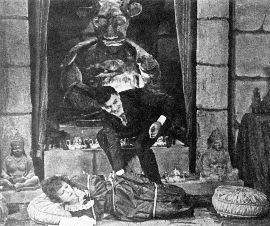 Dr. Reid Stanhope, a noted scientist, and Raoul Bornay, a Frenchman of questionable standing, set out upon an expedition to explore the mysteries of ancient Egypt. With their caravan of natives and camels, they pierce the very heart of the great Sahara Desert in their search for the Temple of Death and the sacred Talisman of Set, both considered mythological by everyone except Dr. Stanhope.

After weeks of searching they discover a sarcophagus upon which hieroglyphics read: “He that toucheth or taketh away the Sacred Talisman of Set will bathe his hands in human blood.” Reaching inside the sarcophagus, Stanhope takes out the Sacred Talisman which is also known as the Devil's Trademark – the cloven hoof of Satan.

From the moment the Talisman is released, murder and destruction run rampant. Stanhope is forced to kill Bornay when attacked by him and Bornay's final words are “Don't think you killed a friend – they sent me to get you and the Talisman.” Who “they” are provides the foundation for the story of the rest of the serial, which takes place after Stanhope returned to civilization. 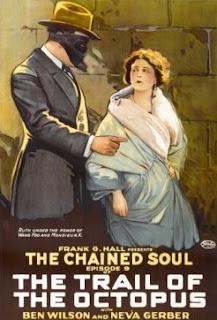 When we pick up the story from there, we see Stanhope telling his niece Ruth he has never had a moment's peace since he hid the Devil's Trademark in a rock vault – he's been haunted by the sudden mysterious appearance of a pair of uncanny looking eyes. While Dr. Stanhope tells the story, a thunderstorm arises and the “eyes” appear outside. He tells Ruth she must get rid of the Talisman as it endangers her life. He takes a dagger from a drawer and says, “Eight other daggers like this are in the hands of eight fellow scientists for safe-keeping. You must have all of them to get the combination of the rock vault, in which is hidden the sacred Talisman.”

When Stanhope receives a telephone call from the mysterious masked Monsieur X, who tells him that his friend, Professor Hubbard, one of the scientists, is dead, Ruth runs across the street to call on Carter Holmes, the criminologist, taking the dagger with her.Stanhope's scream in the distance begins a chain of events that leads to the kidnapping of Ruth by a clan of Devil Worshippers headed by a sorceress named Madame Zora, and a three-way battle between Holmes, the Devil-cult, and an Asian mastermind known as the Octopus to possess the Talisman by collecting the remaining daggers and placing them together in a cliffside vault that will reveal its secret.

An extremely atmospheric serial, heavily influenced by aspects of THE MYSTERIES OF MYRA (the Devil-cult with its crystal ball, and characters who disappear into astral form), and anticipating DRUMS OF FU MANCHU in its noir-ish look, THE TRAIL OF THE OCTOPUS changes location and emphasis many times but remains generally in early pulp/detective/horror mode throughout, with more than the occasional element of the paranormal thrown in to kick the mystery up a notch. 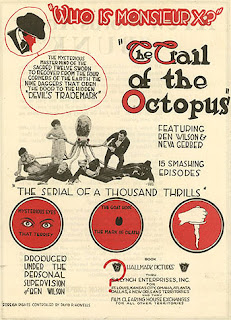 This serial is being restored by the Serial Squadron and even some missing scenes are being re-filmed with contemporary actors in order to have the story be as complete as possible. Doing this costs money though, and to get this production completed the Serial Squadron has a pledge drive going.  What this means is that you pledge beforehand to pay for the DVD upon completion of its production (Spring 2011).  This ensures that the costs of restoration and DVD production are covered.  The TRAIL OF THE OCTOPUS page explains:

Pledging does not require immediate payment, however, your pledge is a promise to pay for your DVD set when the DVDs are ready to go to press and should be considered an "order" to be billed to you. You will be sent an email confirming your pledge which only requires response in case of any error in the message, then, if and when the pledge drive reaches its total, an invoice with a PayPal link which will allow you to pay for your DVD set, or information on how to pay using a check or money order by regular mail.

The pledge for TRAIL OF THE OCTOPUS is $40 for 2 double-sided DVDs.  This is a very fair and reasonable price for a micro-production which is putting out a small run, but professionally restored and extremely rare serial.  You won't find this serial anywhere else because it does not exists anywhere else. This DVD set is being digitally remastered from a 35mm print from the Library of Congress.

Along with the visual restoration the Squadron's Eric Stedman has mixed a new sound track including music that is scene relevant along with sound effects for important points of nuance.  This in my opinion really adds a layer of watchability and entertainment value to the whole project. You can see and hear the results in a sample posted at the bottom of this entry.

Please do NOT pledge if you do not intend to follow through with your order.  But please do pledge if you want to be able to own a cool if not amazing part of movie history. Head to the Serial Squadron and fill out the form at the bottom. Be sure to click in the yellow box on which pledge choice you want to make.

The Squadron has a few ongoing pledge drives for different serials and as of this writing TRAIL is at 48% of its goal.

Check out the first 15 minutes of the first episode of TRAIL here:
Posted by shonokin at 10:05 AM