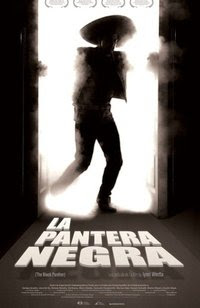 Though completed in 2009, La Pantera Negra is only now slowly making its way through the festival circuit.  To paraphrase the production notes:  Nico Beamonte is a private detective, alcoholic and decadent. One day he receives a call from God, who asks Nico to find "The Black Panther". What or who is the Black Panther? God doesn't say but Nico takes the job. While looking for The Black Panther he meets Mrs. M., who also asks for help. She says Pedro Infante, the idol of Mexico (a true life music and movie legend comparable to Elvis) who died years ago is more alive now than ever. So she wants Nico to find Pedro as well. What Nico does not know is that this is a plan conspired between God and Mrs. M. to face his destiny. Nico will gradually  notice that the search for The Black Panther is really a search for his own existence, hidden in his past and his dreams.
This is a skirmish into an existential dreamland, full of wild tangents and seemingly side stories.  It is a rare film which while watching it, the thread of the story gets washed away. As we are presented with one stylish set-piece after another forming a string of disjointed, barely discerned narrative it seems to not make any sense.  Usually it's pretty easy to see where a story is taking you by the end of the first act. But with this I was left wondering until the last few minutes of the film what exactly this journey had been.  But at the end of the movie I realized what I was seeing, which was a fresh adaptation of a classic story from an 19th Century American writer.  I won't say more than that about which writer or story, as if you've read it or seen other adaptations, it will be a complete spoiler.
La Pantera Negra is shot in black and white, oozing with Noir style and hard-boiled pulp attitude.  There are elements of fantasy and science fiction mixed with some entertaining musical numbers. The music incidentally was written by Director Iyari Wertta.  I am hoping that not only a DVD will eventually be available for this film but also the soundtrack, as the music really was enjoyable and impressive, fusing a 50's Noir vibe with modern rock underpinnings.
During Nico's quest to find the Black Panther we meet a wide array of characters.  His ex-girlfriend and ex-partner who has also been contacted to find the Black Panther and spends her time dressed up as a ninja-like crime-fighting superhero.  There is El Gringo, a rich white guy who sees a flying saucer and tracks it and the alien pilot down.  The alien winds up switching bodies with El Gringo's daughter's lesbian partner.  El Gringo sends Nico on his third mission, to track down the lesbian girlfriend alien.
In the end, all of these disparate threads suddenly collide together in a classic "Gotcha" moment made famous in the story I hinted at above.  La Pantera Negra is a really interesting film mixing mystery, sci-fi, horror, music and comedy but not revealing any of its secrets until the very end.  It made for an interesting thought process while watching the movie, where I wasn't sure if I liked it or not. But when it was over and as the days have gone by and allowed it to percolate in my mind, I found myself really happy with the experience, and find it to be a must have on DVD. Thus hoping for a domestic release eventually.
La Pantera Negra is not even in the art-house circuit but is making the film festival rounds. I just saw it at the Redwood City International Latino Film Festival.  The only way I know of to find upcoming dates is to become a fan on the production's Facebook page and Twitter feed.  I highly suggest trying to track it down. As a lover of odd ball and outre pulp and Noir, I recommend it!

I recently saw this film at the Denver Film Festival and loved it! But I am completely lost on your reference about the famous 19th century writer. C'mon, go for the spoiler! Not knowing this is really driving me crazy!