The Mysteries of Myra 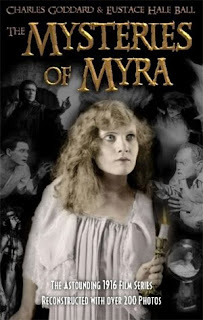 I love pulps. I also love cliffhanger serials. And maybe more than anything, I love behind the scenes info and history about movie and television production. As my poor suffering wife can attest, my bookshelves are jammed with reference books and guides about pulp characters, old movies, radio dramas and T.V. shows.

Enter Eric Stedman, an entrepreneur who dedicates long hours to the restoration and preservation of many cliffhanger movie serials. At The Serial Squadron you can get a taste of the massive amount of work he has put into the genre through his line of restored movie DVDs along with relevant books and audio.

One of Eric's latest projects (one of many ongoing productions) is the novelization of a lost serial from 1916. THE MYSTERIES OF MYRA is a strange brew of action, intrigue, magic, spiritualism, monsters and zombies. As Eric put it "an X-Files of 1916". Unfortunately quite possibly all prints of MYRA were lost in a warehouse fire. At least at this date it is still considered a lost serial. This is truly unfortunate as from the evidence at hand and eloquently shown in this book, MYRA may be one of the most astoundingly put together serials of the silent and talkie era. From the looks of the stills and behind the scenes photos and info, this was a lavish production with impressive sets and intriguing special effects.

The process of this production was a painstaking one, as Eric explains:

Tracy Burton ... took on the job of interpreting fuzzy microfilm versions of the newspaper serializations of the story -- virtually all of which were incomplete, damaged, or otherwise messed up, which means after her pass through it and interpretations she was able to make, it took two other guys (me and Dr. Daka) hours and hours to fill in the missing words and correct errors. Daka discovered ... that there were about 5 different versions of the text, also, which all appeared in different newspapers, with different illustrations. 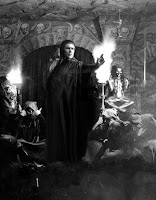 Along with reconstructing the various newspaper serializations of the story into a coherent novel, Eric delved deeply into researching the production history of MYRA, which is contained in a lengthy introduction and includes many production photos and biographies of cast and crew.

So here we have it; a novel that any pulp writer would dream to write, which is based on a legendary serial that no longer exists, along with a lot of tasty background info and photos. A perfect storm of entertainment for anyone who is into pulps, serials and movie history bound into one handsome tome.

This is the sales blurb for the book, which concisely explains what it's all about:

BEWARE THE BLACK ORDER! So comes the warning from the spirit of Myra Maynard's father, who reaches out to her from beyond the grave to warn her of danger from the masters of the occult arts that lurk in the shadows and mark her for murder on her eighteenth birthday. Only the world's first psychic detective, Dr. Payson Alden, and his friend Haji the Brahman mystic, can save clairvoyant Myra from the terrors of The Grand Master of the Order, who tries to claim not only her fortune but her life by means of suicide-inducing spells, invasion of her chamber by spirit assassins, and even reanimation of the dead by a fire elemental. Originally a fifteen-episode serial shot in Ithaca, New York (before Hollywood became the center of American movie-making) in 1916, painstakingly reconstructed from the original screenplay, novelization, and existing stills. Includes background information, behind-the-scenes photos and cast biographies.

At $25 it is well worth the price of admission and I urge you to head over to the Serial Squadron and pick up a copy.

http://mysteriesofmyra.com indicates that there is an updated version of the series in production right now.