The Lone Ranger's Cave of Terror 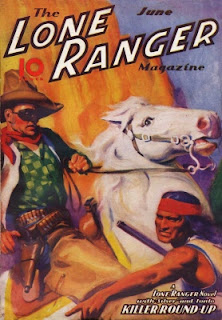 I was never really a huge fan of the Lone Ranger. I watched the Clayton Moore TV show as a kid, and the Filmation cartoon that came on in the late 70s or 80s. The idea of a masked avenger is a cool one, and one that is tried and true in the pages of the pulps. The list of masked vigilantes in comics, film, TV and books is too long to go into here.
I should admit I'm not a big fan of Westerns in general as well. But in some cases I do find them fun, especially if they are on the weird side. Cowboys fighting zombies, werewolves, vampires and wendigos can be good entertainment.
Lately I've been watching some pretty crumby but very fun Mexican horror/western/masked vigilante movies such as El Charro de las Cavaleras and El Latigo contra Satanis. That sort of got me looking back at the Lone Ranger and I did find some interesting stuff. For one thing there was a Lone Ranger cartoon in the 1960s which seemed to be mirroring or even cashing in on the popularity of The Wild Wild West as it pitted Kemosabe and Tonto against an array of steampunk machinery and vampires and ghosts. That sounds pretty cool! But too bad it isn't available on DVD anywhere.
An episode of the weird west Lone Ranger cartoon from 1966
Another interesting cartoon is this silent short subject.
So as things always seem to go it seemed like looking into Fran Striker's own written word on the Lone Ranger might be a good idea, just in case there were any cool creepies in there.  Well the one title I've found so far that sound creepy is The Cave of Terror and this is our digital experiment for Thanksgiving.  Seems at least kinda fitting.  I don't know if Tonto agrees, but we'll hope so.

find it at archive.org
Posted by shonokin at 5:21 PM