DEVIL DOG and the SHADOW KNIGHTS

Here are a couple of new articles on the Pulp History series. "Pulp History brings to life extraordinary feats of bravery, violence, and redemption that history has forgotten. These stories are so dramatic and thrilling they have to be true" And they are true!
DEVIL DOG 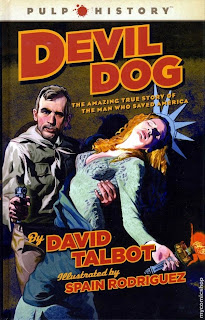 This TRUE story is about the man who saved America:
DAVID TALBOT: One day after Roosevelt is elected, two men come out, and they begin to lay out a plot to overthrow President Franklin Roosevelt.
But, you may never have heard of Smedley Butler. His history in many ways parallels the birth of the American empire and modern American history.
This is not your dry stuff of texbooks. Local author David Talbot and his crew have created “pulp history” series, telling the exciting tales of forgotten history.
TALBOT: You can’t make this stuff up.
Pulp history author David Talbot brings us the story of Smedley Butler, the man he claims “saved America.” In his new book Devil Dog, Talbot brings to life the adventures and heroism of the most-decorated Marine in history as he runs down rebels in Nicaragua, throws gangsters out of Philadelphia and blows the lid off a plot against FDR. Let’s drop in on one of Butler’s many tales of heroism, when he was a young marine occupying Nicaragua.
Listen to and/or read the rest of this story at CROSSCURRENTS. 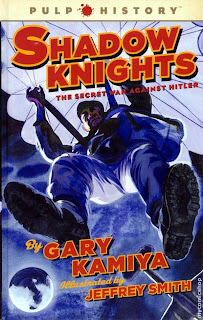 In “Shadow Knights: The Secret War Against Hitler,” one of two books in the series that Simon & Schuster released last month, a British spy named Harry Rée wrestles with a Gestapo agent: “He gouged at one of the man’s eyes, but it wouldn’t come out. He tried to bite off his nose, but it was too tough. Then Ree shoved his forefinger into the German’s mouth, between his teeth and cheeks, and pulled up hard. The man squealed in pain and sent Ree flying over his head.”
Mr. Talbot explained: “We definitely did not want to make history like spinach, good for you but boring. We wanted to do the stuff that wasn’t good for you, with good guys, bad guys, blood, guts and sex.”
Read the rest of the story at NYTIMES.

For extensive previews of both books head to Simon an Schuster page.
Posted by shonokin at 1:48 PM

I just read this book, and am blogging about it myself. Great stuff.