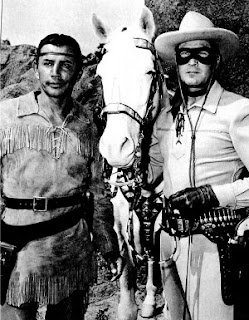 Though George Trendle and Fran Striker were the creators of both The Lone Ranger and The Green Hornet, due to rights for the properties being with different companies the two characters could not explicitly exist in the same universe.  But the intent was there.  The Green Hornet AKA Britt Reid was the son of The Lone Ranger's nephew Dan Reid.  Young Dan Reid who's father was one of the original seven Texas Rangers ambushed and killed by the Cavendish Gang, rode with the Lone Ranger on many adventures during his time on radio and TV.
The November 11, 1947, radio episode of  THE GREEN HORNET "Too Hot to Handle" insinuates this relationship as Dan Reid tells his son, Britt, about his history with the Lone Ranger.
I had read plenty of times about this fateful episode, but for some reason never got around to listening to it.  Finally I did this morning and I do have to say it sent a tingle down my spine as Dan Reid recounts the story and the William Tell Overture fades into the background.  Here is the pertinent part of the radio script. The episode itself can be found here.
BRIT: I saw political grafters and confidence men bend the law nearly double without actually breaking it.  I had inside information on political bribes.  I knew of crooks in our government and there wasn’t a thing that could be done about them.  We couldn’t even publish their activities because the law couldn’t get proof that would hold up in court.  A lot of criminals went free because of tricky laws and red tape.
DAN: But the Green Hornet – everyone thinks the Hornet is a criminal.
BRIT: Dad – I could see only one way to get those rats.  Someone had to meet them and play the game their way, with no holds barred.  Putting them in jail was the most important thing in the world to me.  It came ahead of the newspaper.  Ahead of my reputation.  Ahead of everything.  (beat)  If you’ll look at the records, you’ll see that I was successful.  Maybe I was wrong…
LINDA: No.  No, you were not wrong!
DAN: Who knows about this?
BRIT: Kato.  Linda Travis.  And now you.
DAN: And now that the secret is out – what’re you gonna do?
BRIT: The secret is not out unless you let it out.  Kato has shared the secret with me.  Linda will share it.  It could be shared with you.
DAN: (dismissively) Ahhh!
LINDA: Mr. Reid – regardless of what the public thinks, there isn’t a single charge against the Green Hornet.  The police haven’t a thing on him.
DAN: There were charges!  The Sentinel has been offering a reward…
LINDA: Yes, but the record is clean now.  The last murder charge was wiped off the books a few days ago.
DAN: And Linda – you’d forego the reward to keep this secret?
LINDA: Oh, I… I don’t want that kind of money.
DAN: (softening) Well… you can’t buy loyalty like that.
LINDA: Oh, there’s such a need for someone like the Green Hornet.
BRIT: It’s up to you, Dad.  Are you… with me?
MUSIC:               STING; SUSPENSEFUL MUSIC
ANNOUNCER: After announcing his identity, Brit Reid hadn’t taken his eyes off his father.  He had seen various emotions.  Shock.  Disbelief.  Controlled anger in the strong, rugged face.  This had given way to a hurt expression.
MUSIC:               FADES OUT
ANNOUNCER: But as he explained his position, Brit saw his father’s chin come up.  Then, during a momentary silence, the eyes of father and son met.  Between the two, there flashed a spark of mutual understanding.  A look of confidence came into Brit Reid’s clean-cut features and the older man looked proud.
DAN: (begins chuckling under Announcer’s speech.)
ANNOUNCER: Then there was a faint grin that expanded to a chuckle.
BRIT: (beat) Dad.  You’re not angry.
DAN: Angry?  Why, how can I be angry with you?  I know exactly how you feel.  Because… I went through the same thing.
BRIT: You?
DAN: Look at that picture on the wall.  The man on that horse is one of your ancestors.  And those hills are in Texas.  When I was a boy, I rode with that man.
MUSIC:               WILLIAM TELL OVERTURE FADES IN VERY QUIETLY
DAN: I saw him six-gun his way through red tape and ride roughshod over crooks who thought they were too smart for the law.  He rode for justice.
MUSIC:               WILLIAM TELL OVERTURE BUILDS, THEN FADES OUT
DAN: Brit.  I gave you the Daily Sentinel because I knew you’d learn a lot about smart crooks that the law couldn’t get.  I’d hoped you’d do something about those crooks, just as your pioneer ancestor did.  I wanted to see you use the paper as a crusading weapon.  I wanted to see sparks fly.  But… nothing came!
BRIT: But Dad…
DAN: I was disappointed, son.  I wondered what was the matter with you.  Wondered why the American heritage didn’t assert itself.  That’s why I sent Linda here.  I sent her to find out what was wrong with you.  And… now I learn.  (deeply moved)  Why, confound it, Brit… you’re more like the man in the picture than I dreamed you could be. (This man is definitely using every ounce of willpower to hold back tears.)  This is the biggest thing that’s… that’s ever happened to me.  This is…!
BRIT: (beat) Dad…
DAN: (sighs; regains control; chuckles a bit at his “weakness”) You and Linda will have to forgive an old man his emotions. 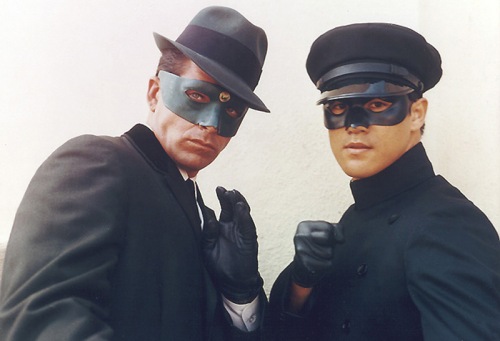 great story! thanks for posting it Dan!

Thanks David! I can just imagine being a kid in the 40's and sitting by the radio listening to the show and suddenly hearing this speech. Must've been a great revelation or great realization at the time, since it probably still is to many people now.

The entire story behind the Reid family tree (which began in 1941 with a special radio broadcast over WXYZ, followed by the introduction of Dan Reid in 1942, etc.) is documented in extreme detail in an 800-page book, THE GREEN HORNET: A HISTORY OF RADIO, COMICS, MOTION-PICTURES AND TELEVISION by Terry Salomonson and Martin Grams. Glad to see the connection between the two masked vigilantes are being remembered!