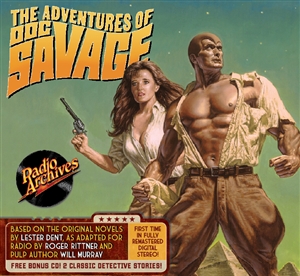 There has been a lot going on in the retail world of the pulps this year and I would like to offer some suggestions for holiday gift giving:

First off, pulp historian and fictioneer Will Murray has been full steam ahead in his new Doc Savage novel writing and pulp audio adaptations.  Radio Archives has been adapting several pulp classics to audio this year. You will find THE SPIDER: PRINCE OF THE RED LOOTERS, THE BLACK BAT: BRAND OF THE BLACK BAT, DOCTOR DEATH: 12 WILL DIE and of course DOC SAVAGE in THE JADE OGRE, PYTHON ISLE, WHITE EYES plus a digitally restored CD of the Doc Savage radio dramas FEAR CAY and THE THOUSAND HEADED MAN. All of these can be bought as CDs or digital downloads from RADIO ARCHIVES.
Also in the aural zone is film director Larry Fessenden's new horror audiodrama label Tales From Beyond the Pale.  These are tales of horror inspired by the classic Old Time Radio shows and star the voice talents of many genre favorites such as Vincent D'Onofrio, Ron Perleman and Doug Jones.  The full season 1 (10 episodes) is available as DVD packs, a complete boxed set or digital downloads. For more info and samples please check out their website at talesfrombeyondthepale.com/ 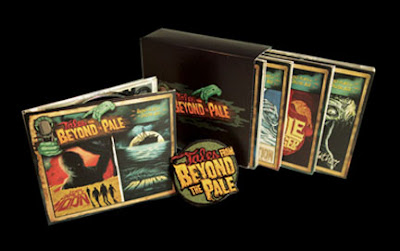 In the visual landscape there are a few DVDs to take note of.  One is the nutty mashup of Raymond Chandler's FAREWELL, MY LOVELY and apocalyptic mad scientist genre, The BIG BANG, directed by Tony Krantz and starring Antonio Banderas.  Probably an either love it or hate it movie, it has a daring and brazen edge to it that keeps it visually and plot-wise quirky. I thought it was a lot of fun. 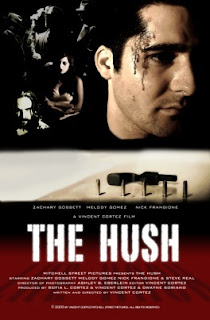 I have to mention one of my favorite modern hard-boiled flicks, GIVE 'EM HELL MALONE which is an over the top action mystery that is part Will Eisner's THE SPIRIT and part fevered action romp as seen in the writings of The Spider's author Norvell Page. This is a really fun movie that doesn't take itself seriously but hits all the right buttons for super pulpy action.

And finally for DVDs, as I mentioned on Facebook, what I consider the must have movie of the year for the Weird Menace pulp aficionado is Vincent Cortez's The HUSH.   This is an indie movie made on $8000. But don't let that fool you into thinking it is not a quality production.  The Hush has everything hitting the right marks. It is a dark, brooding, supernatural hard-boiled neo-Noir with loads of action, drama and phantasmagorical effects.  I have a full review here.  You can now buy a signed DVD for $15 straight from the director.  If you want to have a really interesting stocking stuffer for your pulpy friends this year, I highly recommend this film!

A late breaking entry for DVD is the H. P. Lovecraft Historical Society's latest film THE WHISPERER IN DARKNESS. Previously the HPLHS produced the silent short movie THE CALL OF CTHULHU and they have now produced a feature length "talkie" adaptation of Whisperer.  It is now on sale at their website. 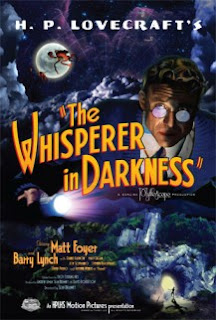 And then we have the books and magazines!  First off, we have the holiday issue of The STRAND magazine which is printing a lost Cornell Woolrich story "Never Kick a Dick" which is set in a hotel overlooking Biscayne Bay. The STRAND also rediscovered a lost Dashiell Hammett story "So I Shot Him" published in the Feb 28th 2011 issue.

As mentioned above, Will Murray has a new line of Doc Savage novels being published. These can be found at Adventures in Bronze.

Also, earlier this year I talked about Donald Keyhoe's Philip Strange, WWI flying ace. Strange fought demons and dinosaurs on the European battlefront. How can you not love biplanes vs pterodactyls!
There is also a whole world of pulp reprints and new material being published these days. The best place to keep track of it all is at Coming Attractions.
Posted by shonokin at 10:29 AM