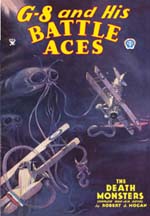 When I first started The Pulp Reader there were what I considered a top handful of interesting pulp heroes; Doc Savage, The Shadow, The Spider, Secret Agent X and G-8 and his Battle Aces.  Sure there's hundreds of pulp heroes out there, but those were the ones I was most interested in.

G8 seemed to be one of the more oddball characters as he was a WWI ace pilot who was also a top spy and happened to fight giant bats, flying tentacled behemoths, panther men, animated skeletons, intelligent apes and a whole menagerie of bizarre and supernatural creatures conjured up by the madmen employed by the Kaiser.

The ideas were over the top and crazy and a lot of fun. The only hindrance to the reading experience was that though creator Robert Hogan had a fertile and unfettered imagination, his writing skills were pedestrian, suffering IMO mainly from direly wooden dialog and sometimes vague descriptions of action.

The story setup was so sweet but the execution was unexceptional.

Well, there's a lot of pulp history that I just don't know about. But I'm always happily discovering new information!  What I've discovered this week is that 2 years before the creation of G-8 there was another author writing about a pilot fighting the same type of Weird War...

The pulp reprinting publisher AGE OF ACES specializes in WWI aviation. They've been around for a few years now, putting out high quality collections that you just weren't likely to see anywhere else.  They've culled the stories of The Red Falcon (also written by Hogan and existing in G-8's universe), Captain Combat, The Three Mosquitoes, The Iron Ace, Smoke Wade and others.

I was recently made aware that they would have a new book premiering at Pulpfest 2011 called Captain Philip Strange: Strange War written by Donald Keyhoe.  If you are into Ufology you may have heard of Keyhoe as he wrote a few books about and was heavily into the UFO phenomena scene.

Well before the UFOs he was a Major in the USMC as a fighter pilot.  And drawing from that experience he entered the pulp world, writing for magazines such as WEIRD TALES and notably FLYING ACES with stories of heroic pilots who fought weird menaces at the WWI Front lines.

AGE of ACES describes Captain Strange as such:

Welcome to a Strange War! In Donald E. Keyhoe’s imaginings, the stormy skies of World War I are filled with giant pterodactyls, mystic fireballs and demon aces. But America has it’s own unnatural secret weapon: Captain Philip Strange. A mental marvel from birth, he was so terrifyingly effective that the Allies referred to him as “The Phantom Ace of G-2.” But to the Germans he was “The Brain-Devil,” whose penetrating green eyes were both a legend and a nightmare. Keyhoe’s Philip Strange stories ran for nine years—from 1931 through 1939—in the pages of Flying Aces magazine. This first volume in our new series contains six exciting tales of terror skies! It also features an introduction by Sid Bradd and is beautifully wrapped up in an exciting new design by Chris Kalb!

Having my interest piqued I started roaming around the 'net and found a few of these Strange tales online. The one I'm reading right now is the short story The Skeleton From the Sky.  I have to tell you that having that true life experience in the deadly skies really set's Keyhoe's writing apart from Hogan's and probably most everyone else's.  Like Dashiell Hammett who was employed by the Pinkerton's before embarking on writing about The Continental Op and Sam Spade, Keyhoe's working knowledge of his subject matter comes through especially in the air combat.  His character studies are quick and concise but let you know each person remarkably well. This was somebody doing what Hogan got famous for with G-8, but doing it much better.

Captain Philip Strange: Strange War should be out at the regular online bookstores any time now.  I know I'm ready and waiting! 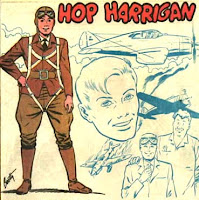 To whet your appetite, instead of an audiobook, I'm going to point you to The Skeleton From the Sky in PDF and HTML form.

And for the aural aerial experience, the comic book turned Radio show turned cliffhanger serial Hop Harrigan can be found at my neighbor, archive.org.  This is a surprisingly good show that reminds me a lot of a cross between these weird aerial pulp adventures and the early adventures of Steve Canyon. The files at archive.org are a bit out of order, but it's the only place I've seen them around lately.
Posted by shonokin at 5:14 PM