Arsene Lupin in: The Crystal Stopper

As promised on Facebook, The Pulp Reader is presenting Maurice LeBlanc's Arsene Lupin thriller THE CRYSTAL STOPPER.  After watching the first episode of the French 1971 television series starring Georges Descrieres, which is an adaptation of this story, I felt compelled to see how different it is from the book.  The TV adaptation was surprisingly good and imagine the novel to be even better. 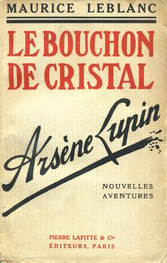 Information from Wikipedia: The Crystal Stopper is a mystery novel by Maurice Leblanc featuring the adventures of the gentleman thief Arsène Lupin. The novel appeared in serial form in the French newspaper Le Journal from September to November 1912 and was released as a novel subsequently. Maurice Leblanc was inspired by the infamous Panama scandals of 1892 and 1893. The novel borrows from Edgar Allan Poe's short story The Purloined Letter the idea of hiding an object in plain sight.
Plot Summary:  During a burglary at the home of Deputy Daubrecq a crime is committed and two accomplices of Arsène Lupin were arrested by the police. One is guilty of the crime, the other innocent but both will be sentenced to death. Lupin seeks to deliver the victim of a miscarriage of justice, but struggles against Deputy Daubrecq's ruthless blackmailer, who has an incriminating document hidden in a crystal stopper.

* Listen to the stream right here: