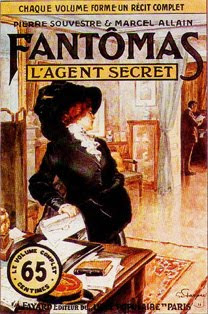 A three day celebration of 100 years of Fantomas is coming to San Francisco in April. But before getting to this big event, I'd like to point you to Tim Lucas at Video WatchBlog who has reprinted his essay from HORROR: ANOTHER 100 BEST BOOKS at his site. It gives a great recounting of the history of Fantomas. Tim starts by saying:

One hundred years ago today, the criminal genius known as Fantômas was first released into the world in the form of a fat paperback novel printed on uncut pulp paper. Written by Pierre Souvestre and Marcel Allain, it sent shock waves throughout popular culture which resonated in literature (with numerous knock-offs), silent films (the Feuillade serial adaptations, but also notably F.W. Murnau's FAUST, which quoted Gino Starace's striking cover painting), and which still resonate today. One of these still-rumbling shock waves we now know as the Anti-Hero.

Head over to Video Watchblog to check it out!

City Lights Booksellers & Publishers in conjunction with the Cultural Services of the Consulate General of France & the Mechanics' Institute Library present:

A Centenary Celebration of the Literary Creation of Pierre Souvestre and Marcel Allain.
WHO IS FANTOMAS?? Arch-villain? Mad genius? Master of disguises? Agent of chaos?
In 1911 the pulp fiction writers Pierre Souvestre and Marcel Allain introduced a fictional character to the French reading public that was to capture their imagination and keep them yearning for more. The ultimate anti-hero, as enigmatic as he was treacherous, Fantomas executed the most appalling crimes with ruthlessness and precision. He spread terror and chaos amidst the lives of a bourgeois society that he took pleasure in ridiculing. Souvestre and Allain were in tune with the pulse of the public's fascination with shadow-side of modernity. Fantomas was to become one of the most popular serials in the history of French crime fiction anticipating the future arrival of Fritz Lang's Dr. Mabuse and the master villains of Ian Fleming's James Bond novels. On the occasion of the one hundred year anniversary of the creation of the FANTOMAS series, City Lights Booksellers and Publishers joins centenary celebrations in Paris to commemorate this extraordinary literary event.
FANTOMAS BY-THE-BAY shall feature: readings, lectures, film screenings, art exhibitions, and performance art, featuring Robin Walz, Dominique Kalifa, Daniel Handler, Mel Gordon, Marc Ellis, Howard Rodman, Jonathan P. Eburne, Janaki Ranpura, Jill Tracy, and more.
Schedule:

EVENT 1.) FANTOMAS STRIKES THE BAY!
Date & Time: Wednesday, April 6, 2011, 7:00 P.M.
Location: City Lights Booksellers & Publishers, 261 Columbus Avenue, S.F., CA 94133 (admission free)
Reception and Absinthe tasting followed by an evening of readings, diatribes, and manifestos – accompanied by a display of FANTOMAS book covers & artwork
Opening Statements by Peter Maravelis & Robin Walz
Readings and performances by Jonathan P. Eburne, Marc Ellis, Andrew Joron, Daniel Handler in a musical duet with chantuese Jill Tracy, Dominique Kalifa, Brian Lucas,  Joseph Noble, Howard Rodman, and Robin Walz, and more tba.
-
EVENT 2.) FANTOMAS! AGENT OF CHAOS!
An exploration of the origins of Pulp Surrealism
Date & Time: Thursday, April 7, 2011, 6:00 P.M.
Location: Mechanics' Institute Library, 57 Post Street, San Francisco, CA 94104 (admission charge $12.00, members free)
Join four erudite cultural explorers as they delve into the history and lore of one of the most notorious literary creations ever. Fantomas was the ultimate anti-hero who was adopted by the surrealists as a cultural mascot. On the occasion of the centenary celebration of Pierre Souvestre and Marcel Allain's pulp serial, the roots of pulp literary history will be exhumed in evening of lively discussion.
-Opening Statement: Peter Maravelis/ City Lights
-Session 1: The Genealogy of Fantômas - From Lacenaire to Ravachol via Rocambole (Robin Walz)
-Session 2: From the Hills of Montmartre to the Bay of San Francisco : One Century of Fantômas's Friends (Dominique Kalifa)
-Session 3: The Shudder of History (Jonathan P. Eburne)
-Session 4: The Origin of Fantomas: Why there isn't one (Howard Rodman)
-
EVENT 3.) AN ELEGANT THREAT
A performance piece and soiree by Janaki Ranpura

with a special musical appearance by The Slow Poisoner
Location: Undisclosed & Secret (admission free)
Date & Time: Friday, April 8, 2011, 8:00 P.M.
Engage in crimes of love, where visiting crime scenes is the dating game. Interactive environments and puppets take you on a noir journey to the human heart, which is made of candy. The spector of Fantomas looms in the shadows.
(This event is by invitation only. Admission is free, but on a first come first serve basis. Invitations become available at the front counter of City Lights on 4/6/2011)
-
EVENT 4.) THE SCREEN BLEEDS: FANTOMAS on Film
Location: Mechanics' Institiute Library, 57 Post Street, San Francisco, CA 94104 Date & Time: Saturday, April 9, 2011, 7:00 P.M. (admission $10.00, members free)
A screening of selected excerpts from the Fantômas films over the course of the last century. We shall visit the work of such directors as Louis Feuillade, Paul Fejos, Andre Hunebelle, Jean Sacha, and Robert Vernay. Also included in the program will be a special focus on the Fantômas inspired films (i.e. Judex, Les Vampires, and more.)
-Opening Statement: Peter Maravelis/City Lights
-Commentary by Howard Rodman & Robin Walz
-Special presentation by Mel Gordon (Fantomas in French Musical & Brothel Culture)
(Films for this evening were curated by David King and Peter Maravelis)
Posted by shonokin at 2:02 PM