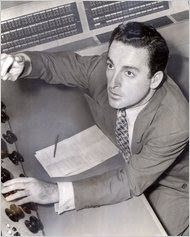 By JOSEPH BERGER for The New York Times Published: June 6, 2010 A version of this article appeared in print on June 7, 2010, on page A21 of the New York edition Times Reader 2.0: Daily delivery of The Times - straight to your computer. Subscribe for just $4.62 a week.
Himan Brown, who long before there was television created immensely popular radio dramas like “The Adventures of the Thin Man” and “Dick Tracy,” employing an arsenal of beguiling sound effects that terrified or tickled the shows’ many listeners, died on Friday at his home in Manhattan. He was 99.

Another of Mr. Brown’s creations was the radio drama “Grand Central Station,” but probably his most memorable was “Inner Sanctum Mysteries,” whose ominous opening of a creaking door and menacing farewell of “pleasant dreams” became signatures not just of the show but also of the heyday of radio itself, when listeners sitting on the family sofa or curled under quilts attached their own fanciful images to the sounds coming out of a box that had no screen.

While radio dramas are now celebrated as wistful nostalgia by people in their 70s and 80s, Mr. Brown never stopped believing in the form. In 1974, when radio drama was all but extinct, he began a nightly series called CBS Radio Mystery Theater that ran until 1982 and even revived the creaking door. He continued to produce radio dramas about influential Americans into his 90s for Brooklyn College’s station.

“I am firmly convinced that nothing visual can touch audio,” Mr. Brown said in a 2003 interview, his eyes sparkling. “I don’t need 200 orchestra players doing the ‘Ride of the Valkyries.’ I don’t need car chases. I don’t need mayhem. All I need to do is creak the door open, and visually your head begins to go. The magic word is imagination.”

In his prime, in the 1930s and 1940s, he was a jack-of-all-trades, once estimating that he produced or participated in over 30,000 shows. He wrote and doctored scripts, sold shows to advertisers, and directed actors like Orson Welles, Helen Hayes, Boris Karloff and Peter Lorre. As a teenager, he was the voice of the first Jake, Molly Goldberg’s husband, in the earliest version of the show about the Goldbergs, a homespun Jewish family in the Tremont section of the Bronx. But he also played the Italian father in another ethnic soap opera called “Little Italy.” 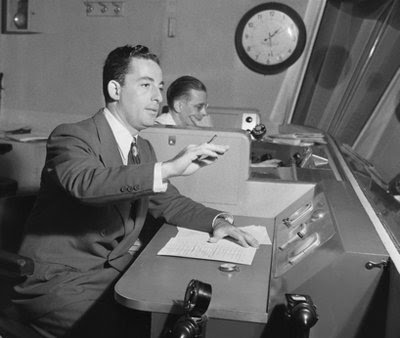 He became an expert in sounds that could instantly epitomize a character or a city. Foghorns and the clang of Big Ben became London. A belly laugh was a fat man.

“Grand Central Station,” an anthology show, was one of Mr. Brown’s first big hits, with its portentous opening declaring that the terminal was “the crossroads of a million private lives, a gigantic stage on which are played a thousand dramas daily.”

It was characteristic of his self-confidence that when listeners complained that the chugging sounds of a steam engine were not what you ordinarily heard at the terminal, he would reply: “You have your own Grand Central Station.”

Mr. Brown grew up in Brownsville, Brooklyn, the son of immigrant tailors from the outskirts of Odessa in Ukraine. Yiddish was the dominant sound in his neighborhood, but also important was a violin, which his parents insisted he learn to play well. He was entranced by the idea of catching the next wave to success, and a shop teacher at Boys High School told him, “There’s a new thing now, radio.” He was told that he could hear WLW in Cincinnati with a copper wire wrapped around a Quaker Oats box.

“What a revelation that was right here in Brooklyn,” Mr. Brown said.

Having done some acting at a local synagogue dramatic club, he persuaded the young NBC station WEAF that he could read a newspaper column in a Yiddish dialect. One of his listeners was Gertrude Berg, the resourceful inventor of the Goldbergs. Within a year, and with his help packaging the show, “The Rise of the Goldbergs” started a run that with its conversion to television would last 30 years. But after six months, Mrs. Berg fired him, buying him out for $200, he said.

Mr. Brown continued to work in radio as an independent producer while attending Brooklyn College. At a time when companies financed shows and attached their names to them, he would try to sell a potential sponsor, like the Goodman’s matzo company, on an idea for a radio play and, if successful, put the show together. One result was “Bronx Marriage Bureau,” about a matchmaker.

The degree Mr. Brown received from Brooklyn Law School aided his ascent: it helped him acquire the rights to fictional characters like Dick Tracy, Flash Gordon, Bulldog Drummond and the Thin Man. “The Thin Man” also had a typical Brown touch: the sound of a pull on a lamp chain as the self-styled detectives Nick and Nora Charles went to bed. “It was as sexy as I could get,” he said. 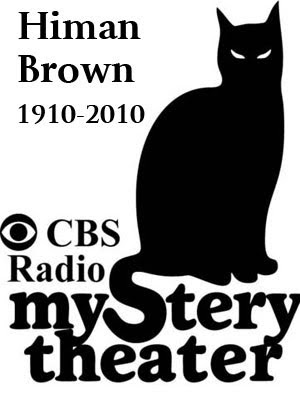 As he prospered in radio, Mr. Brown became a perceptive art collector. The eight-room Central Park West apartment he shared with his first wife, Mildred Brown, and his second, Shirley Goodman, a force in the growth of the Fashion Institute of Technology, was filled with paintings by Renoir, Degas and Picasso.

Mr. Brown owned a weekend home in Stamford, Conn., where he once rented a studio out to a young writer, J. D. Salinger, who at the time was working on “Catcher in the Rye,” according to his granddaughter.

Both of Mr. Brown’s wives died before him. Besides Melina Brown, he is survived by a son, Barry K. Brown; a daughter, Hilda; another grandchild; and four great-grandchildren.

Mr. Brown did not weather the shift to television. He turned “Inner Sanctum” into a syndicated TV show, but it did not last. Once characters were visible, viewers were no longer enchanted. The creaky door had lost its spell.