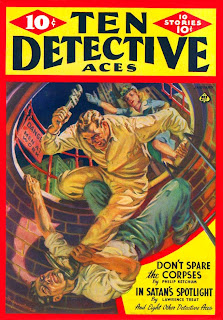 There is a long and hallowed line of pulp detective adventurers who have come up against what was known as "Weird Menace". These were detective stories placed in the realm of either the occult, science fiction or horror. But usually they tended to have what I would call a "Scooby Doo" ending, where the supernatural elements are explained away as skulduggery created by some criminal element looking to scare a rich couple out of their mansion, take over a nice yacht or protect a nice pot of gold in an old house. Once in a while the culprits turned out to be bone fide monsters, ghosts and aliens.

Modern occult detectives seem more likely to come across real supernatural circumstances, such as TV's newspaper reporter Kolchak the Night Stalker and the book and TV series The Dresden Files. Dresden is actually a wizard who consults with the police and detectives on cases that have supernatural or unexplainable occurances involved.

But back to ye Olden Dayes of Pulp... 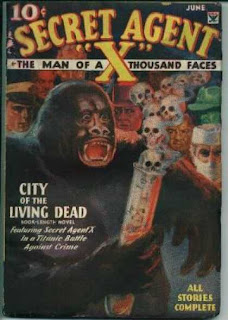 There are quite a few of these Victorian monster smashers out there; Seabury Quinn's Jules de Grandin, William Hope Hodgson's Carnaki, Algernon Blackwood's John Silence, Manly Wade Wellman's John Thunstone and so on. To a certain extent Tom Swift hit upon Weird Menace stories and even Nick Carter came across the occasional ghost caper.

Probably one of the longer running but lesser known of these detectives is gentleman adverturer Wade Hammond. He worked closely with the police on solving various weird menace capers through 40 short stories printed in two different magazines; Detective-Dragnet and Ten Detective Aces. Probably the reason Wade Hammond drifted off into obscurity is because he never got his stories anthologised back in the day, so the reprint and rememeber factor was slim. Also creator and author Paul Chadwick went on to overshadow Hammond with a much more popular character who got his own book series, Secret Agent X. 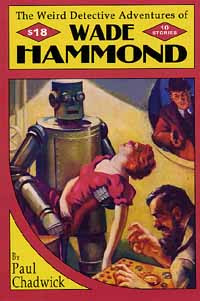 For the past couple of years Chadwick's Wade Hammond has started getting the omnibus treatment in a series of four collections called The Weird Detective Adventures of Wade Hammond being put out by Off-Trail Publications. Off-Trail is also reprinting the subject of my previous post - Arthur O. Friel's Pedro and Lourenco stories in Amazon Adventures.

I've ordered the first Wade Hammond collection and while I wait for it to arrive, wanted to get a taste of what these stories will be like. I thought I would share and if you enjoy this, please be encouraged to order the Off-Trail collections. They are available at all the online book outlets such as amazon.com and ebay, etc.

Goto Archive.org to listen now
listen to the m3u stream
Or download the zip file
Posted by shonokin at 10:05 AM