The Mill at Calder's End 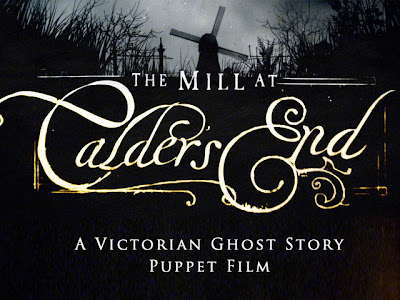 Whether you've been lucky enough to see it in full at festivals or at least the trailer, you may have been drawn to Kevin McTurk's curious puppet show-turned-short film called THE NARRATIVE OF VICTOR KARLOCH.  The imagery is stark and powerful, the atmosphere electric with fear of the unknown. All of the major visuals and characters brought to life via puppets, practical effects and miniature sets.

Karloch was produced by Heather Henson's Handmade Puppet Dreams project and the Jim Henson Foundation. The film hit the festival circuit and on special occasions had live performances.

If you have been aching to see this supernatural puppet show but hadn't the chance. Soon you will, and even more, you'll be able to help contribute to the next installment of the "Spirit Cabinet" series, of which Karloch is the first.  McTurk is now raising funds for THE MILL AT CALDER'S END. Another Victornian ghost story cut from the clothe of Poe, Lovecraft, Bava and Hammer films.

Artistic contributors to the project include Hellboy's Mike Mignola and B.P.R.D. and The Marquis Guy Davis. Karloch starred the voices of Elijah Wood and Christopher Lloyd while Calder's Mill stars Barbara Steele and Jason Flemyng.

Head over to the kickstarter page to check out more in-depth info on the production!