The Mysteries of London

Sometimes the most innocent turn in your travels lead down darker paths.
This might sum up the Penny Dreadful The Mysteries of London and also my experience in finding such a story. 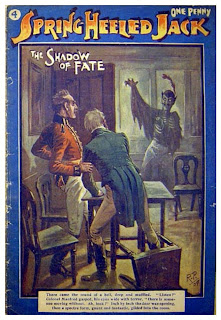 I had my curiosity piqued when following a link from a newspaper comic strip archive to John Adcock's Yesterday's Papers. The post displayed covers painted by Robert Prowse Jr for a Spring-Heeled Jack series. I found this to be very interesting. When looking into the print history of this well known boogieman I started reading up on some of the Victorian English Penny Dreadfuls which made Jack a household name.
The history of Spring-Heeled Jack in print starts in the 1830s with accounts of  his accosting lone travelers. In the early publications readers had to wonder if he was man, beast or demon? Whatever he was, he wasn't a nice guy. But by the 1860s, in the Penny Dreadfuls this started to turn around and Jack was reinterpreted as a hero.
Spring-Heeled Jack became possibly the very first prototype for Batman;  A rich young man loses his parents to a tragedy at sea. When trying to claim his ancestral home he finds the estate and even his family name stolen from him by his villainous cousin. When fleeing for his life after a murder attempt Jack decides to create a costume and his Springed Heel apparatus in order to start a new life as a vigilante.
You can read this account here. As someone so into hero and horror pulps I found a natural affinity for this style of writing.  It has lead to further reading. And in the case of The Mysteries of London, further listening. Though The Mysteries of London can be read online, right now my reading stand is full.
This is exactly how The Pulp Reader first came into existence; too many books and too little time. I was going to make a digital TTS edition of Mysteries but first thought I'd see if anyone had already made an audiobook of it.  And yes, there is one... in progress.
Cori Samuel is an etext / digital book maven. She has proofread and assembled a large amount of material for Project Gutenberg and has also gotten into the audiobook realm at Librivox.  I have to tell you honestly that I'm not always a fan of Librivox. While there is the rare reader who is a delight to listen to, some of which I've mentioned in the past,  mostly I find the quality to be painful.  Cori falls into the first category and is an excellent and riveting storyteller with great delivery and cadence.
Here's the thing though, Cori has been stuck for a while and has possibly not felt inspired to get past whatever hurdles are preventing her from continuing the reading.  What about you head over to her page and give a listen to the first chapter, then if you like what you hear, drop her a line in the comments section and let her know you would love to see her finish this epic story. I know I would!
In the meantime, you can find a few other Penny Dreadful audiobooks at Librivox and Archive.org. Here is a quick list:
The String of Pearls (the first appearance of Sweeny Todd)
The Old Man in the Corner (Sherlock Holmes-ish)
Varney the Vampire
G. K. Chesterton's Defense of Penny Dreadfuls
Posted by shonokin at 10:17 AM