The Continental Op in THE DAIN CURSE

Lately I've been getting into the hardboiled detective genre which is something I've never tried before. I was on a Arsene Lupin kick for a while which in a round about way led to an interest in Nick Carter. I mean the real Nick Carter, the detective, not the so called "Killmaster". The thing is, it's really hard to find any original Nick Carter. There's like two stories on the net and the rest are expensive buys from collectors. I'm surprized those original stories haven't ever been reprinted.

Anyway that search left me wondering about other pulpy detective types. I'd never read any Chandler or Hammett and decided to pick up some short stories of each. I started with Hammett and read several Continental Op stories. This is the detective that Hammett created before Sam Spade. These are gritty and nihlistic, sometimes hitting the psychotic tone of Norvel Page's THE SPIDER yarns. I was impressed.

Then I read some of Raymond Chandler's Philip Marlowe shorts and found it quite entertaining but maybe not as edgy as Hammett. I'll keep reading some of both authors for a while. The short stories go down easy. 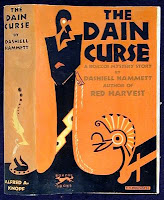 I decided to put a longer Hammett piece up to listen to during the commute. THE DAIN CURSE which is comprised of 4 short stories published in BLACK MASK Magazine from 1928 - 1929. Since this blog tends to deal with the outre I felt this was a pretty good example of the detective genre crossing into the weird tale. As it may sound from the title, this deals with magic, curses, drugs and human sacrifice amongst the normal twists and turns you might find in the hardboiled detective genre.
While Philip Marlowe has had quite a movie presence, the Continental Op has only had a few excursions to Hollywood. The first was a TV miniseries in 1978 that very faithfully adapted THE DAIN CURSE. In 1995 the HBO series FALLEN ANGELS adapted "Fly Paper" and in 2002 "The House In Turk Street" (AKA THE GOOD DEED) was made into a movie with Samuel L. Jackson.

High There,
I found your blog today, so now I have a few stories to listen to.
I am daily searching the web for audio stories, love the HPL and REH stuff and by the way I did read all the Chandler and Hammett stories. The fat, never named, continental OP was a favorit of me.
I still have 'The Big Knockover and other stories' by Hammet.
Please go on with puting in audio the stories you like, there is a public for this.
Best of luck with your blog.

I would say you should persevere with more Chandler (though it may just be personal preference, I like his Pulp style more than Hammett's!).

The "Killer in the Rain" edition gathers a bunch of his short stories which go on to be used in his novels, but by all accounts "The Big Sleep" is not his best. Maybe try some short stories then delve in to a novel like "The High Window"...

"The Long Goodbye" is definitely an amazing book, though, so don't skip it :)

Hi,
I hope this isn't too inappropriate, but I couldn't find contact information on your website (which I have now bookmarked - amazing what wonders are out there on the web that I've been missig.)

I am promoting my new web comic, Lovecraft is Missing, at http://www.lovecraftismissing.com. The first pages went up last week, and I will be posting 2 or 3 new pages each Wednesday. I'm a long time HPL and pulp fan, and I think I have a different take ona Lovecraft comic. It would be great if you could take a look at it; if you like it, any mention or link would be overwhelmingly appreciated. I have a trailer up on YouTube, but the only way I know of to get to the pulp fans is to go blog by blog. Thanks.

Thanks for the comments! I'm definitely a fan of both Hammett and Chandler. I've read quite a few pre-name-change-to-Marlowe, Philip Marlowe stories and am still reading Continental Op stories. They are all enjoyable in their own ways.

Larry, Lovecraft is Missing is excellent so far, you must keep doing more! Great artwork and story thus far and yes, it is different from the standard Lovecrafty comics.

me, i love the Hollywood Detective stories, and would love to see the movies made about Dan Turner.

Tell me more David, I haven't heard of this.

it's not so much the stories as the complete purple prose style it's written in. i really enjoyed them.

now i thought he had been in more movies in the forties, but it's only one. still, should be fun.

Chandler and Hammett are THE best IMHO. Reading and rereading Chandler's novels is a guilty pleasure. I don't think that the Chandler short stories do his novels justice. Conversely I like Hammett's short stories more than most of the novels - with the exception of the Maltese Falcon.

Enjoyed the read, thanks for posting - The Dain Curse is my favourite Hammett 'novel' (though most critics plump for The Glass Key or Red Harvest which inspired the movie Miller;s Crossing) because it is weird, very atmospheric and just, well, odd..

On the whole though, i'd say that whilst Hammett wrote better short stories than Chandler, it was Chandler that wrote the best novels. The Long Goodbye is a masterpiece of 20th century fiction.

There's a comment above re: The Big Sleep saying something like 'by all accounts not his best', um, by what accounts exactly? The general consensus is that is TBS is one of his greatest along with Farewell My Lovely and TLG. Chandler himself disliked The Little Sister but critics tend to finger The Lady in the Lake and Playback as the runts of his litter. But they're enjoyable all the same.

Oh and i;d recommend Jim Thompson and James M. Cain to you.

I'm reading (arguably) the progenitor of the whole movement now, Race Williams by Carroll John Daly. Race was Spillane's inspiration for Mike Hammer. I'm enjoying the heck out of the Race Williams yarns. They are true pulpy goodness.