THE WITCH'S TALE
Time goes by so fast, especially when you are really, really busy from sun up to sun down. It's been so busy that I haven't had time to enter anything here lately much less encode any books to audio format.

But I do want to touch base and just let people know what I've been listening to in my ever lengthening commute.

A few posts back I talked about the website for Quiet, Please, and since then I've kept up with some studies on the history of horror on old time radio. What is generally considered to be the first major horror OTR program was The Witch's Tale, written and produced by Alonzo Dean Cole. This started in 1931 and ran through 1938. Old Nancy the witch-host of the show was originally 75 year old Adelaide Fitz-Allen. When she passed away 5 years later she was replaced by a then 13 year old Miriam Wolfe.

This is one of my favorite radio series since it keeps pretty straight forward into the occult horror genre and rarely strays into standard detective-type pot boilers. Here we find werewolves, ghosts, giant insects and revenge from beyond the grave!

You can find 60+ episodes at archive.org click here to go straight to the streaming and download page. 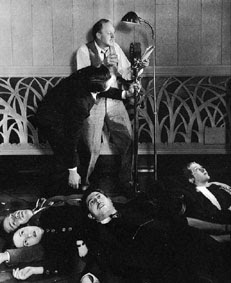 Probably one of the most enduring radio shows, up there with Inner Sanctum and The Shadow, is LIGHTS OUT. Started by Wyllis Cooper of QUIET, PLEASE fame, it was taken over by an extraordinary entrepreneur by the name of Arch Oboler. This was a horror and weird fiction anthology that would not die. Starting in 1934 it took a break because of WWII for a couple of years but resumed from 1942 until 1947. There is a distinct patriotic edge to the 1942 - 47 run but it isn't obnoxious. Oboler would run a series called "Arch Oboler's Plays" which were aimed directly at the war effort. Those stories ranged in quality but really did show the breadth of what Oboler was capable of writing.

In the early 1970's Oboler would revisit the LIGHTS OUT oeuvre with THE DEVIL AND MR. O. Oboler tended to stay more on the weird tales, horror and detective noir with a twist ending type tales and a lot of become true classics. The primary one everyone sites is CHICKEN HEART which Bill Cosby did a skit on in the 70's, about a living chicken heart that grows exponentially until it threatens the existence of the entire Earth. Another personal favorite is also a mad science out of control yarn called OXYCHLORIDE X. You can find episodes in many entries on archive.org, but here is one of the biggest deposits of episodes.

Another I haven't gotten to yet is The Witch's Tale -- Stories of Gothic Horror from the Golden Age of Radio. Yorktown Heights, NY. Dunwhich Press. 1998. by David Siegel.

Also I'd like to point out the website Radio Horror Hosts, which is a great nexus of horror related OTR. Here you can find info on almost all of the horror shows that appeared on U.S. radio since the 1930s, along with articles ranging from violence and censorship on the radio to its influence on TV and comics.
Posted by shonokin at 3:00 PM

Very good, classic stuff. Thanks for this post, I've been looking into more horror lately from the golden age of radio.