SOLOMON KANE: THE MOON OF SKULLS 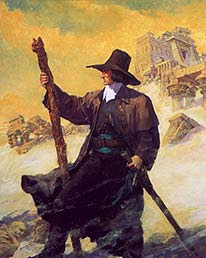 For some reason I was just never a big fan of Two-Gun Bob's peplumy fantasy worlds. They are well written, there's no doubting REH is a master wordsmith of action packed and or horrifying adventure tales, but Conan, Kull, Red Sonja and friends are just not really my thing.

I do find Solomon Kane to be very interesting though as it mixes a little Sword & Sorcery with a little Talbot Mundy or Arthur Friel "exotic adventuring". In fact I believe REH has said that he was a big fan of Friel, so it comes as no surprize that the types of bloody adventure found in Friel and Howard are a pretty close match.

Along with today's experiment I want to point out a couple of things going on in the world of Kane. For one, there is an indie movie now being produced. There's not a ton of info on it but the writer/director is putting out a video blog about the project. 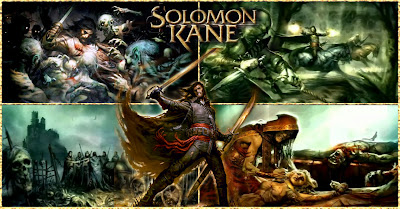 Also there was a fan-made short recently, adapting one of the Kane poems, "The Return of Sir Richard Grenville". It's pretty cool especially for a short, fan-made film. You can check it out by hitting the arrow below. 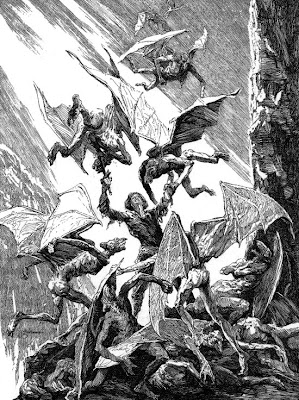 ALSO it looks like the DARK HORSE Comics' REH line will be putting out a series based on Kane in 2008.

If you are interested in buying the book there is a definitive edition collecting all the stories, poems and fragments, with excellent illustrations by Gary Gianni. From the same publisher are three poems you can download from here.

So on with the experiment. Today we have one of the longer stories in the Kane series, THE MOON OF SKULLS. Click to run in your browser or right-click and "save as" to download.

hi Dan- i never knew you did this! great blog!

Love this image of Kane fighting the Akaanas from "Wings in the Night". I saw a lot of this in the imagery in the movie VAN HELSING. Howard once said all he wanted to do is rewrite History as fiction. There may be better historical writers out there but there is no one who does a better historical dark fantasy.

Hi there, I am a great fan of REH and I still hope someone will put all of his stories in audio.
I found a lot of REH's stories in computer-generated audio.
Here is the link: http://www.archive.org/details/RobertEHowardPublicDomainAudio2
Hope you like the stories.
Greetings from Holland.
Roland